It's been a month since COVID-19 made us adjust our lives to the new reality. RISEBA staff and students have also studied and taught remotely during this emergency situation. Our t…
read more 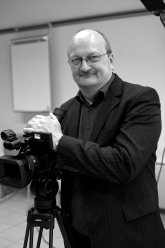 He started as a lighting technicial, worked as an assistant director, principal director, head of production and as a director general. He deepened his knowledge and developed skills in Baltic Media Centre and Netherlands Media Art Institute.

He used to be one of the directors and founders of the first Latvian independent theatre “Kabata” from 1987 until 1996.
He was a co-chairperson of Latvian Association of Broadcasting Organizations between 2004 and 2007.

After his work in Latvijas Televīzija he went into the sphere of education and formed a professional undergraduate study programme Audiovisual Media Arts in 2009.

besides his work in the high school he also works as a media expert.
He is currently doing doctoral studies of Business management in RISEBA.
Began actively participating in international academic conferences in 2011. He’s an author of many research articles.
His academic interests are development potential of Latvian audiovisual sector and development of the concept of modern social media model.

Attended Hamburg Art Academy of Free Arts Performing Arts graduate department with Professor Marina Abramovich and Mike Hentz to complement his 12 year experience working as a creative director in advertising. He worked in a variety of video, 2D and 3D animation-related projects. One of the Latvian founders of VJ [video DJ] movement. Still working as a VJ in creating about 30 different projects. Parallel work in advertising has acquired the TV moderator professionals working in reality shows. In his free time engaged in a variety of extreme sports: kitesurfing, snowboarding, wakeboarding, diving.  (http://www.videostafford.com/; http://artismotionworks.posterous.com/)

Prof. Mike Hentz holds an impressive body of works whose nature and the synthesis of audiovisual language and experimental approbation have been featured in several international creative projects.  Born on July 2d, 1954 in New Jersey (USA), is a graphic artist, photographer, musician and performance artist, based in Berlin.  Besides his artistic work, focused mainly in new media and performance teaching worldwide.  Living in Italy, Austria and Switzerland he learned classical violin and was trained in musical theatre in Paris.  He co-founded the performance group “Deficit Delta T” publishing an album called Death Opuses. Besides, he organized the festival "Padlt Noidlt" in Zurich. With Minus Delta T he travelled world wide performing in public space, art galleries and festivals, touring around and making research about identity and culture of the diverse realities. In the 80’s Hentz had several guest professorships such us the one in the college for pedagogic arts in Hamburg. He also worked as an actor in the Frankfurt opera house. During the same years he co-founded the Broadcast radio programs "Frigo", "Radio Bellevue" and the „European Media Art Lab“ in 1989.
On the 90’s he begun with the tv projects “Van Gogh TV”, “Piazza Virtuale” and the “Univercity TV” all interactive television events shared through cable or satellite and developed in a performative basis. Later on he extended his sphere of activity to the East European countries, teaching in “The Institute of Art and Technology” in Moscow and at the University of Riga. In Poland he worked in cooperation with the Polish National Television to spread and establish a Media Art channel.
From 2003 Hentz is head of the Newmedia faculty in the Academy of arts in Stuttgart and is performing in festivals and performance venues around the World.

Aigars holds an MFA in Film Directing from California Institute of the Arts and Bachelor’s in American Art History from Lawrence University, had studied theater directing at John Goodman School of Drama in Chicago.  Working in Los Angeles since 2001 Aigars had served as an assistant and film editor to Randal Kleiser.  Currently, he is the Director of Master Studies in Audiovisual Arts, passioned to advance a sensible post-production infrastructure in Latvia as well as engrafting more the Anglo-Saxon tradition and principles into the Latvian theatrical arts.  Currently Aigars works as a feature film editor with Forma Pro Films.

“Interactive Cinema”
Dr. Christopher Hales has studied PhD research on Interactive Film Art at the RCA Film and TV Department, and taught as Senior Lecturer at the Faculty of Art of the University of the West of England [Bristol] until 2001. His interactive films and CD-ROMs have been shown to date at film/ new media festivals in Sheffield, Perth, Melbourne, FCMM Montreal, Oberhausen, Hong Kong, Helsinki, Rotterdam, Berlin, and others. His "Interactive Cinema" installation showing selections of interactive movies has been shown in Japan, Germany, Holland, Canada, Denmark, London and South Korea.